Established in 1973, Adams Morey has an extensive customer base in the truck and van marketplace across the south coast, with its company headquarters in Southampton and a further six locations in the region.

We’re pleased to have supported our longstanding clients with the next stage of their family succession planning.

Nick Kingdon, chairman of Kingdon Holdings, said: “It was not an easy decision to sell the business after so many years, but we do so with complete confidence in Adams Morey to maintain the spirit of service that we have fostered with our customers and staff. Our business continues to evolve, and, in these days of larger organisations, we are sure Adams Morey will look to enhance that spirit to the benefit of customers and staff alike. We wish them all well.” 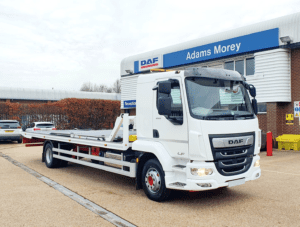 Nick Tippett, corporate finance director at PKF Francis Clark, said: “We’re pleased to have supported our longstanding clients with the next stage of their family succession planning. It’s great to see the Kingdon family realise the benefits of their hard work over many years and embark on the next chapter of their lives knowing that the business they have built is in safe hands. This is an excellent acquisition for Adams Morey and a good geographical fit with their existing branch network.”

Adams Morey is part of the Greenhous Group, which has a further four DAF locations in the West Midlands and is ranked in the Sunday Times Fast Track list of the UK’s top-performing private companies. The acquisition will make Greenhous Adams Morey one of the largest DAF dealership groups in Europe.

“Nick Kingdon has developed a wonderful independent business which has rightly earned a great deal of respect from its customers for the level of customer service it has delivered. I am excited to welcome the Wessex staff into the Adams Morey family and look forward to further prosperity in the South West.”

He said: “We have significant plans to grow the business; the South West is a fantastic area and these four locations give us a superb platform to meet all customers and operators in the area. We have solid foundations already in place. I’ve inherited a first-class team, our branch infrastructure covering the DAF Truck network is vital to the area.”

Find out more about how our corporate finance experts can help with sales and acquisitions.

Luxury flapjack maker Devonvale is set for growth after a successful management buyout. Managing director Martin Loader and chairman Tony Revill-Johnson have acquired the Honiton-based business from founders Keith and…

PKF Francis Clark advised the owners of Golden Coast Ltd, the UK’s largest independent distributor of swimming pool and spa components and accessories, on the sale of the business to…

We're excited to be shortlisted for Corporate Finance Advisory Team of the Year at Insider Media's South West Dealmakers Awards. It follows a record-breaking year for our team as we…