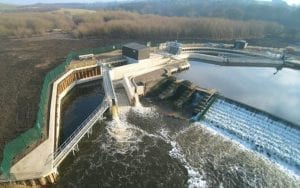 PKF Francis Clark’s Energy & Infrastructure corporate finance team is delighted to announce that it has successfully advised the shareholders of Yorkshire Hydropower Holdings Limited (“YHHL”) on the disposal of 100% of their interest in Kirkthorpe, a 500kW single turbine hydro project on the river Calder; Thrybergh, a twin screw 260kW hydro project on the river Don and a 1.2MW battery co-located at Thrybergh and commissioned in January 2018.

The projects were sold to John Laing Environmental Assets Group (UK) Limited (“JLEN”) in a transaction which completed on 18 July 2019 following a process which commenced earlier this year.
As lead advisers for the transaction, Richard Harris and Andy Thornhill from PKF Francis Clark, worked closely with the board and management of YHHL to approach the market and receive offers from a number of potential acquirers. As part of an efficient disposal process, offers from the leading parties were developed to the point where JLEN were ultimately selected as the preferred party.

Mark Simon Director of YHHL commented “At Thrybergh and Kirkthorpe, YHHL built two of the three largest hydropower stations built in England this century and these amazing sites will be generating throughout the rest of the 21st century (at least). In addition Thrybergh was the first commercial battery co-located with hydropower and therefore represents another ground breaking milestone for the industry”.

“PKF Francis Clark conducted a comprehensive and efficient process for YHHL which resulted in a very large amount of interest; we are delighted to have concluded this transaction with John Laing Environmental Assets Group”.

Richard Harris at PKF Francis Clark commented, “We were delighted to work with YHHL to bring these high quality assets to the market and conclude a deal which crystallises the value from years of innovation and hard work. This was a unique opportunity due to the scale of the hydro assets alongside a co-located battery, which resulted in a number of competitive offers from a wide range of UK and international investors”.

Luxury flapjack maker Devonvale is set for growth after a successful management buyout. Managing director Martin Loader and chairman Tony Revill-Johnson have acquired the Honiton-based business from founders Keith and…

PKF Francis Clark advised the owners of Golden Coast Ltd, the UK’s largest independent distributor of swimming pool and spa components and accessories, on the sale of the business to…